We provide safe and comfortable transfer from Istanbul New Airport ISL in Istanbul to any location in Turkey. Istanbul Airports transfers provided by Istanbul Elite Transfer are unlike any typical Istanbul taxi or shuttle services. Using a taxi service, it is highly possible that you will find the taxi unclean, uncomfortable, unsafe and with expensive prices. Our operational philosophy is to provide safe and comfortable transfer without having any hidden costs. We do not charge any additional payment due to flight delay or traffic congestion. It is also diffucult and exhausting to get to any location by metro, by airport shuttles or by any other public transportations. Using our services will make your stay comfortable and will guarantee your piece of mind.

At IstanbulEliteTransfer, we offer a variety of flexible transportation options for Istanbul New Airport ISL in Istanbul, so you can ride your way. If you need any ride in Istanbul you can count on, we can help.

Istanbul Airport (IATA: IST, ICAO: LTFM) (Turkish: İstanbul Havalimanı)[3] is the main international airport serving Istanbul, Turkey. It is located in the Arnavutköy district on the European side of the city. 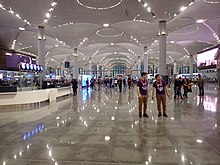 Due to a lack of space to construct an additional runway at Istanbul Atatürk Airport, airport growth being restricted due to the growth of the city, the Turkish Airport Authority not allowing additional cargo or charter flights to the airport, and worsening air traffic congestion, it was decided to construct a new airport to serve Istanbul. Furthermore, due to a lack of slot capacity and parking spaces, some of Turkish Airlines‘ aircraft were based in Sabiha Gökçen Airport[citation needed] which itself is already at maximum terminal capacity of 25 million passengers, and handled 28 million passengers in 2015 after posting traffic growth rates averaging over 20% a year since 2013.[citation needed]

It was decided to construct the new airport at the intersection of roads to Arnavutköy, Göktürk, and Çatalca, north of central Istanbul and between the Black Sea coast towns of Yeniköy [tr], Tayakadın and Akpınar. The area is a 7,659-hectare (18,930-acre) region near Lake Terkos. Some 6,172 hectares (15,250 acres) of this area was state-owned forest. The distance between Istanbul Airport and Atatürk Airport is approximately 35 km (22 mi). The area encompassed old open-pit coal mines, which were later filled with soil.[8]

According to the Environmental Impact Assessment (ÇED) report published in April 2013, there were a total of 2,513,341 trees in the area and 657,950 of them would need to be cut indispensably, while 1,855,391 trees would be moved to new places. However, the Ministry of Forest and Water Management claimed the exact number of trees cut and moved would only be revealed after construction was complete.[8] 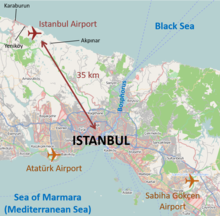 Location of Istanbul Airport relative to the city center of Istanbul, as well as the city’s other two airports.

The tender for construction and operation of the facility until 2030 was held on May 3, 2013.[9] The project is made up of four construction stages. If all stages are completed, the airport will reach a capacity of 200 million passengers, which would have made it the biggest in the world at the time of planning. The first stage of construction was planned to finish within 42 months of the handover of the land. The total project cost is expected to be approximately €7 billion, excluding financing costs. The construction and operation consortium has been guaranteed 342 million passengers in 12 years by the government.[citation needed]

The design team was led by London-based Grimshaw[10] and also included the Norway-based Nordic Office of Architecture and London studio Haptic.[citation needed]

At the bidding session on May 3, 2013, only four out of fifteen Turkish and two foreign companies that were qualified as bidders showed up. The Turkish joint venture consortium of Cengiz–Kolin–Limak–Mapa–Kalyon won the tender, and were obliged to pay the government €26.142 billion including value-added tax for a 25-year lease starting from 2018. The completion date of the construction’s first stage was officially set for 2018 – 42 months after the finalization of the tender’s approval.[8]

The groundbreaking ceremony took place on 7 June 2014,[11] though construction only started in May 2015 after the land was officially handed over.[12]

The inauguration of the airport took place on the planned date of 29 October 2018. It was reported that the first test landing at the airport would take place on February 26, 2018; however, the first landing took place on 20 June 2018.[13] Testing of navigational and electronic systems with DHMİ aircraft had begun on 15 May 2018.[14]

The control tower is in the shape of the Turkish national flower, the tulip.[15]

The construction of the airport is taking place in several stages, expanding the airport and its facilities over time.[9][16][17][18]

The first stage consists of the main terminal, with an annual passenger capacity of 90 million and an area of 1,440,000 m2 (15,500,000 sq ft) – making it the world’s largest airport terminal building under a single roof,[19] despite Dubai International Airport Terminal 3 having a larger floor area at 1,713,000 m2 (18,440,000 sq ft) due to tunnels connecting its two concourses. There will also be two pairs of parallel runways connected to eight parallel taxiways to the west of the main terminal, approximately 4,000,000 m2 (43,000,000 sq ft) of apron space, and an indoor car-park with a capacity of 12,000 vehicles. In addition, the airport will feature three technical blocks for repairs, maintenance, and fueling, as well as an air traffic control tower, eight ramp control towers, and hangars for cargo and general aviation aircraft.[20] Several other services are also to be in operation, including hospitals, frequent-flyer and VIP lounges, prayer rooms, convention centers, and hotels; some of these are expected to form part of the Istanbul Airport City project.[21]

The second stage will add a third independent runway to the east of the main terminal, as well as a fourth remote runway with an east-west heading and additional taxiways and apron areas. The third stage is planned to add a second passenger terminal with a capacity of 60 million annual passengers and an estimated area of around 960,000 m2 (10,300,000 sq ft), as well as an additional runway and a new support facilities area. The final and fourth stage of expansion will, along with adding another runway, allow for the construction of satellite terminals with a combined capacity of 50 million passengers and area of up to 800,000 m2 (8,600,000 sq ft) if needed.[20]

Once fully completed by 2025, the airport will have six sets of runways (eight in total), 16 taxiways, and a total annual passenger capacity of 150 million passengers.[19][22] If fully expanded to a capacity of 200 million, the airport will exhibit four terminal buildings with interconnecting rail access that combine for a total indoor area of 3,200,000 m2 (34,000,000 sq ft). The airport will also have a 6,500,000 m2 (70,000,000 sq ft) apron with a parking capacity of 500 aircraft, VIP lounges, cargo and general aviation facilities, a state palace, and indoor and outdoor parking that can accommodate up to 70,000 cars. A medical center, aircraft rescue and firefighting stations, hotels, convention centers, power plants, and wastewater treatment facilities will also be built.

The Turkish Chamber of Environmental Engineers (ÇMO) took the project tender to court on grounds that the project violated the existing legislation for the preparation of the Environmental Impact Assessment (ÇED) report.[8] In February 2014, an Istanbul administrative court ordered construction of the airport to be suspended.[23] However, the groundbreaking ceremony took place a few months later, on 7 June 2014.[11]

A report published in Turkish newspaper Cumhuriyet in February 2018 claimed that more than 400 workers had been killed during the construction of the airport, with accidents killing three to four workers every week, and families of the killed workers being paid to remain silent about the incidents.[24][25] Turkish daily Evrensel also alleged that fatal accidents continued to occur.[25] This prompted opposition MP Veli Ağbaba to submit a written questionnaire to the Turkish parliament on 13 February 2018. In response, the Turkish Ministry of Labour and Social Security claimed that there were only 27 fatalities during the construction of the airport.[26] In October 2019, UK publications Construction News and Architects’ Journal published a joint investigation into fatalities at the airport – nicknamed by workers “the cemetery” as so many have died.[27] By this point, the official death toll was 55, but unofficial estimates suggested the figure could “be higher than 400”. Four architects worked on the airport’s design, three of them UK-based: Grimshaw Architects, Scott Brownrigg and Haptic Architects.[27]

Mass worker protests broke out on 14 September 2018 after a bus carrying workers crashed, injuring 17. Complaints by workers included poor living conditions in “vermin-infested dormitories”, issues in transportation that had left them stranded under the rain or on site during holidays, and long delays in payments, among others.[28][29] Police and gendarmerie forces were called in and workers eventually returned to work under alleged threats of arrest or further withholding of wages.[28]

The opening ceremony took place on 29 October 2018, scheduled so as to coincide with the 95th anniversary of the proclamation of the Turkish Republic.[31] The airport had been unofficially known as ‘Istanbul New Airport’ during construction – the new official name of ‘Istanbul Airport’ was announced at the opening ceremony. The first flight from the airport was Turkish Airlines flight TK2124 to the Turkish capital Ankara on 31 October 2018.[32] On 1 November 2018, five daily flights began to arrive and depart from the airport: from Ankara, Antalya, Baku, North Nicosia, and İzmir,[33] followed by Adana and Trabzon starting in December.

Before the full transfer, all flights were operated exclusively by Turkish Airlines. Regularly scheduled flights to all of the new airport’s destinations continued to depart from Atatürk and Sabiha Gökçen airports alongside these trial flights. It was originally planned that on 31 December 2018, all equipment from Atatürk Airport would be transferred to the new airport via the O-7 Motorway.[34][35] As of 17 January 2019, the transfer phase was set to start 1 March 2019.[36] However, on 25 February, the transfer phase was moved a fourth time to 5 April 2019.[37]

The airport features a total of five concourses lettered A, B, D, F, and G with a total of 143 passenger boarding bridges. Concourse G, which is located in the southeast, is reserved solely for domestic flights. 3 passenger boarding bridges of Concourse F which is directly to the north of Concourse G has also been allocated for domestic flights. Concourses A, B, D, and F will be used for international flights. The C and E concourses connect directly to the main terminal and are therefore not independent concourses.[40]

3,500 security personnel and a total of 1,850 police, including 750 immigration officers, are expected to provide the airport’s security.[41] The site’s perimeter will be protected using ground radar, fixed CCTV cameras every 60 meters, pan–tilt–zoom cameras every 360 meters, thermal cameras and fiber optic sensors every 720 meters. The active terminal building uses up to 9,000 CCTV cameras.[42]