We provide safe and comfortable transfer from Beyoglu to any location in Turkey. Istanbul Airports transfers provided by Istanbul Elite Transfer are unlike any typical Istanbul taxi or shuttle services. Using a taxi service, it is highly possible that you will find the taxi unclean, uncomfortable, unsafe and with expensive prices. Our operational philosophy is to provide safe and comfortable transfer without having any hidden costs. We do not charge any additional payment due to flight delay or traffic congestion. It is also diffucult and exhausting to get to any location by metro, by airport shuttles or by any other public transportations. Using our services will make your stay comfortable and will guarantee your piece of mind.

At IstanbulEliteTransfer, we offer a variety of flexible transportation options for Beyoglu, so you can ride your way. If you need any ride in Istanbul you can count on, we can help.

Beyoğlu (Turkish pronunciation: [ˈbejoːɫu]) is a district on the European side of İstanbul, Turkey, separated from the old city (historic peninsula of Constantinople) by the Golden Horn. It was known as the region of Pera (Πέρα, meaning “Across” in Greek) surrounding the ancient coastal town Galata which faced Constantinople across the Horn. Beyoğlu continued to be named Pera during the Middle Ages and, in western languages, into the early 20th century.

According to the prevailing theory, the Turkish name of Pera, Beyoğlu, is a modification by folk etymology of the Venetian ambassadorial title of Bailo, whose palazzo was the most grandiose structure in this quarter. The informal Turkish-language title Bey Oğlu (literally Son of a Bey) was originally used by the Ottoman Turks to describe Lodovico Gritti, Istanbul-born son of Andrea Gritti, who was the Venetian Bailo in Istanbul during the reign of Sultan Bayezid II (r. 1481–1512) and was later elected Doge of Venice in 1523.[3] Bey Oğlu thus referred to Lodovico Gritti, who established close relations with the Sublime Porte, and whose mansion was near the present-day Taksim Square. Located further south in Beyoğlu and originally built in the early 16th century, the “Venetian Palace” was the seat of the Bailo. The original palace building was replaced by the existing one in 1781, which later became the Italian Embassy following Italy‘s unification in 1861, and the Italian Consulate in 1923, when Ankara became the capital of the Republic of Turkey.[4]

The district encompasses other neighborhoods located north of the Golden Horn, including Galata (the medieval Genoese citadel from which Beyoğlu itself originated, which is today known as Karaköy), Tophane, Cihangir, Şişhane, Tepebaşı, Tarlabaşı, Dolapdere and Kasımpaşa, and is connected to the old city center across the Golden Horn through the Galata Bridge, Atatürk Bridge and Golden Horn Metro Bridge. Beyoğlu is the most active art, entertainment and nightlife centre of Istanbul.

Parallel to İstiklal Avenue runs the wide bi-directional boulevard named Tarlabaşı Caddesi, which carries most of the traffic through the area and was constructed in the 1980s. The streets on either side of this road contain historic buildings and churches. The once cosmopolitan areas surrounding them have deteriorated.

Foreigners, especially from Euro-Mediterranean and West European countries, have long resided in Beyoğlu. There is a cosmopolitan atmosphere in the heart of the district, where people from various cultures live in Cihangir and Gümüşsuyu. Beyoğlu also has a number of historical Tekkes and Türbes. Several Sufi orders, such as the Cihangirî (pronounced Jihangiri) order, were founded here.

Most of the consulates (former embassies until 1923, when Ankara became the new Turkish capital) are still in this area; the Italian, British, German, Greek, Russian, Dutch, and Swedish consulates are significant in terms of their history and architecture.

The unique international art project United Buddy Bears was presented in Beyoðlu during the winter of 2004–2005.[8]

The main thoroughfare is İstiklâl Caddesi, running into the neighbourhood from Taksim Square, a pedestrianised 1 mile (1.6 km) long street of shops, cafés, patisseries, restaurants, pubs, winehouses and clubs, as well as bookshops, theatres, cinemas and art galleries. Some of İstiklâl Avenue has a 19th-century metropolitan character, and the avenue is lined with Neoclassical and Art Nouveau buildings. The nostalgic tram which runs on İstiklal Avenue, between Taksim Square and Tünel, was also re-installed in the early 1990s with the aim of reviving the historic atmosphere of the district.

Some of the city’s historic pubs and winehouses are located in the areas around İstiklal Avenue (İstiklal Caddesi) in Beyoğlu. The 19th century Çiçek Pasajı (literally Flower Passage in Turkish, or Cité de Péra in French, opened in 1876) on İstiklal Avenue can be described as a miniature version of the famous Galleria in Milan, Italy, and has rows of historic pubs, winehouses and restaurants. The site of Çiçek Pasajı was originally occupied by the Naum Theatre, which was burned during the great fire of Pera in 1870.[9][10][11] The theatre was frequently visited by Sultans Abdülaziz and Abdülhamid II, and hosted Giuseppe Verdi‘s play Il Trovatore before the opera houses of Paris.[12] After the fire of 1870, the theatre was purchased by the local Greek banker Hristaki Zoğrafos Efendi, and architect Kleanthis Zannos designed the current building, which was called Cité de Péra or Hristaki Pasajı in its early years.[12] Yorgo’nun Meyhanesi (Yorgo’s Winehouse) was the first winehouse to be opened in the passage.[12] In 1908 the Ottoman Grand Vizier Sait Paşa purchased the building, and it became known as the Sait Paşa Passage.[12] Following the Russian Revolution of 1917, many impoverished noble Russian women, including a Baroness, sold flowers here.[12] By the 1940s the building was mostly occupied by flower shops, hence the present Turkish name Çiçek Pasajı (Flower Passage).[12] Following the restoration of the building in 1988, it was reopened as a galleria of pubs and restaurants.[12]

Pano, established by Panayotis Papadopoulos in 1898, and the neighbouring Viktor Levi, established in 1914, are among the oldest winehouses in the city and are located on Kalyoncu Kulluk Street near the British Consulate and Galatasaray Square. Cumhuriyet Meyhanesi (literally Republic Winehouse), renamed in the early 1930s but originally established in the early 1890s, is another popular historic winehouse and is located in the nearby Sahne Street, along with the Hazzopulo Winehouse, established in 1871, inside the Hazzopulo Pasajı which connects Sahne Street and Meşrutiyet Avenue. The famous Nevizade Street, which has rows of historic pubs next to each other, is also in this area. Other historic pubs are found in the areas around Tünel Pasajı and the nearby Asmalımescit Street. Some historic neighbourhoods around İstiklal Avenue have recently been recreated, such as Cezayir Street near Galatasaray High School, which became known as La Rue Française and has rows of francophone pubs, cafés and restaurants playing live French music. Artiste Terasse (Artist Teras) on Cezayir Street is a popular restaurant-bar which offers panoramic views of the Hagia Sophia, Topkapı Palace, Sultan Ahmed Mosque and Galata Tower.

Throughout Beyoğlu, there are many night clubs for all kinds of tastes. Babylon and Nu Pera are among the most popular European style night clubs and restaurants in the district, while Kemancı plays rock, hard rock and heavy metal. Maksim plays Oriental music, while Andon is a place where one can eat, drink and dance to the traditional Turkish music called fasıl. There are restaurants on the top of historic buildings with a view of the city, such as 360. Asmalımescit Street has rows of traditional Turkish restaurants and Ocakbaşı (grill) houses, while the streets around the historic Balıkpazarı (Fish Market) is full of eateries offering seafood like fried mussels and calamari along with beer or rakı, or the traditional kokoreç. Beyoğlu also has many elegant pasaj (passages) from the 19th century, most of which have historic and classy chocolateries and patisseries, such the Markiz Pastanesi, along with many shops lining their alleys. There is also a wide range of fast-food restaurants in the district, of international chains such as McDonald’s, Burger King, Domino’s Pizza, Pizza Hut, etc.; as well as local Turkish chains, such as Simit Sarayı which serves simit (sesame-covered, ring-shaped pretzel bread) along with cheese and tea, or individual eateries such as döner kebab houses.

Apart from the hundreds of shops lining the streets and avenues of the district, there is also a business community. Odakule, a 1970s high rise building (the first “structural expressionism” style building in Turkey) is the headquarters of İstanbul Sanayi Odası (ISO) (Istanbul Chamber of Industry) and is located between İstiklal Avenue and Tepebaşı, next to the Pera Museum. Most of the upper floors of the buildings in Beyoğlu are office space, and small workshops are found on the side streets. 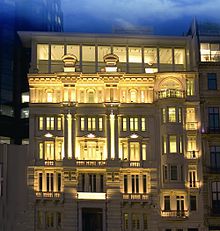 Istanbul Modern, located near Karaköy Port on the Bosphorus, frequently hosts the exhibitions of renowned Turkish and foreign artists.

Pera Museum exhibits some of the works of art from the late Ottoman period, such as the Kaplumbağa Terbiyecisi (Turtle Trainer) by Osman Hamdi Bey. Apart from its permanent collection, the museum also hosts visiting exhibitions, which included the works of renowned artists such as Rembrandt.

Doğançay Museum, Turkey’s first contemporary art museum dedicated to the works of a single artist, officially opened its doors to the public in 2004. While the museum almost exclusively displays the works of its founder Burhan Doğançay, a contemporary artists, one floor has been set aside for the works of the artist’s father, Adil Doğançay.

Hotel Pera Palace was built in the district in 1892 for hosting the passengers of the Orient Express. Agatha Christie wrote the novel Murder on the Orient Express in this hotel. Her room is conserved as a museum.

S. Antonio di Padova, the largest Catholic church in Turkey, and the Neve Shalom Synagogue, the largest synagogue in Turkey, are also in Beyoğlu. There are other important Catholic and Orthodox churches in the area, such as the Saint Mary Draperis church or centrally located Hagia Triada Church at the conjunction point between Istiklal Avenue and Taksim Square. It is the seat of the Chaldean Catholic Archeparchy of Diyarbakir.

The only Jewish Museum of Turkey, which has been converted from a synagogue, is located in the Karaköy quarter, which was known as Galata in the medieval period.