We provide safe and comfortable transfer Sabiha Gokcen Airport SAW to any location in Turkey. Istanbul Airports transfers provided by Istanbul Elite Transfer are unlike any typical Istanbul taxi or shuttle services. Using a taxi service, it is highly possible that you will find the taxi unclean, uncomfortable, unsafe and with expensive prices. Our operational philosophy is to provide safe and comfortable transfer without having any hidden costs. We do not charge any additional payment due to flight delay or traffic congestion. It is also diffucult and exhausting to get to any location by metro, by airport shuttles or by any other public transportations. Using our services will make your stay comfortable and will guarantee your piece of mind.

At IstanbulEliteTransfer, we offer a variety of flexible transportation options for Sabiha Gokcen Airport SAW, so you can ride your way. If you need any ride in Istanbul you can count on, we can help.

Istanbul Sabiha Gökçen International Airport (IATA: SAW, ICAO: LTFJ) (Turkish: İstanbul Sabiha Gökçen Uluslararası Havalimanı) is one of two international airports serving Istanbul, the largest city in Turkey. Located 32 km (20 mi) southeast[1] of the city center, Sabiha Gökçen Airport is in the Asian part of the bi-continental Istanbul and serves as the hub for some airlines, including Pegasus Airlines as well as a secondary base for Turkish Airlines and Borajet (currently suspended). The facility is named after Sabiha Gökçen, adoptive daughter of Mustafa Kemal Atatürk and the first female fighter pilot in the world.[3] Although Istanbul Airport, located 63 km (39 mi) away on the European side of Istanbul, is larger, Sabiha Gökçen is still one of the largest airports in the country.

The airport was built because Atatürk International Airport (located on the European side) was not large enough to meet the booming passenger demands (both domestic and international). The airport opened on 8th January 2001. In June 2007, Turkish conglomerate Limak Holding, India’s GMR Group and Malaysia Airport Holding Berhad (MAHB) consortium gained the contract for upgrading and maintaining the airport. In mid-2008, ground was broken to upgrade the international terminal to handle 25 million passengers annually. The new terminal was inaugurated on 31 October 2009.

In September 2010, the airport was voted the World’s Best Airport at the World Low Cost Airlines Congress in London and received the award.[7] The other awards received by the airport in 2010 were: Turkey’s Most Successful Tourism Investment 2010, the highly commended award from Routes Europe, and the Airport Traffic Growth Award by Airline News & Network Analysis web site anna.aero.[8]

A second runway is currently being built and is expected to be operational in June 2019.[10] The second runway will increase the hourly capacity from 40 to 80 movements. After the second runway is built, Lindbergh Field in San Diego will be the busiest true single runway airport in the world.

The new terminal building with a 25 million annual passenger capacity conducts domestic and international flights under one roof.

The features and services of the new terminal and its outlying buildings include:

The airport’s cargo terminal has a capacity of 90,000 tons per year and is equipped with 18 cold storage depots. 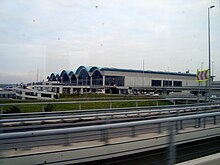 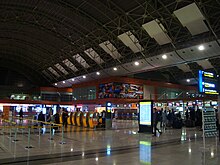 View of the apron